This year, our math department really wanted to make math exciting and visible around campus in conjunction with Pi Day. So we decided to make a whole week (well actually only 3 days) out of it! Here’s what we did.

During math classes the previous Friday and Monday, students decorated a link (a rectangular piece of construction paper) that represented one of the digits of pi. Each class was assigned a section of digits and made a chain for their section, connecting each student’s link.

The links were also color coded by digit.

Then, during Monday’s lunch period, we had a (not-so-ceremonial) hanging of the Pi Chain, wrapping it around all the math classrooms. 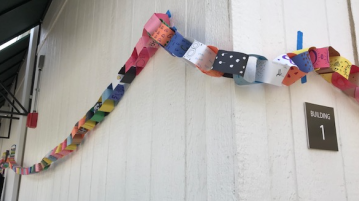 Teams of 3-5 students signed up in advance for a scavenger hunt that would happen during Tuesday’s lunch. Our department worked in advance to create a series of clues that were puzzles, cyphers, etc, leading students around campus to various rooms to get the next clue. At the end of the clues, they were directed back to my classroom, where they had to put their clues together to figure out the code to the lock box, opening the locks (escape room style).

Teams had to come up with team names, and the winning teams were named “The Inte-girls” and “Dobby’s Sock.” The prizes were math-y tshirts, candy and these amazing ruler-slap-bracelets I recently learned about!

Due to various other events (like the student walk out) on Wednesday 3/14/18, we were lower-key on the actual pi day. In my classes, students wrote Pi-Kus (see the link for more info). Teachers and students wore math-y shirts, and during lunch, students were selling pies as a fundraiser!

Additionally, over all 3 days, we had tables set up during lunch periods with (student run) math puzzles, games, tangrams, rubik’s cubes, etc. Students were free to stop by and just play with math-y challenges. Teachers (not in math) dropped by too!

We are already talking about how to grow this for next year!!