I struggled a bit with teaching limits the past few years. Not only are they difficult for students to grasp, but the texts I have used as guides have been a little bit jumpy. Add that to the fact that I teach a non-AP Calculus class. So, this year I really wanted to make a clear exploration of limits, building a strong intuitive understanding of what a limit was asking for. The result: instead of making daily objectives about limit concepts (what is a limit, one-sided limits and infinite limits), I changed my objectives to limit strategies. In other words, our objectives/topics for each day were:

The first two days, we just spent finding limits using tables (on Desmos and in the graphing calculator). I started with the “buffering” idea I mentioned here. Then, we just made lots of tables, explicitly talking about what numbers you would plug in to get “really close” to a certain x-value. Below is a screen shot of the worksheets I used. Notice that we got into infinite limits without talking about them as anything different. 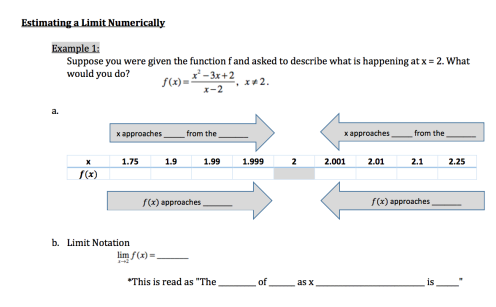 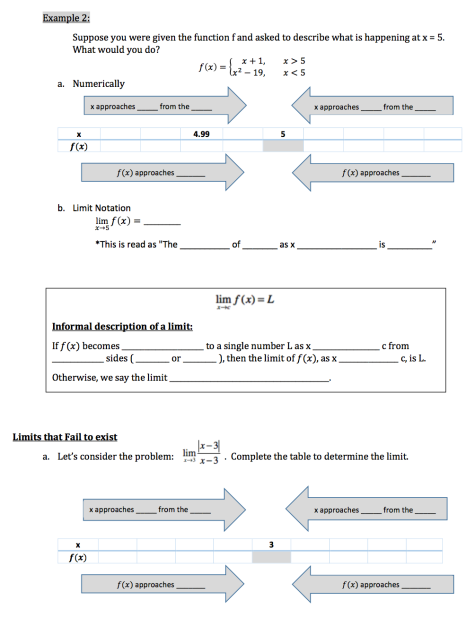 The next day, we talked only about finding limits on graphs. I gave lots of graphs, and we found the limit by reading what the graph is approaching on each side.

My goal was that by the test, students could find limits using whatever method(s) they prefer, having a deep intuitive understanding of what a limit is. And the scores were so much better this year!

As an additional test of how it worked, the day before the test, I gave the following as a warm up problem. I’ve done it every year, and this is the first year students could do it on their own, without any help! They did a great job! 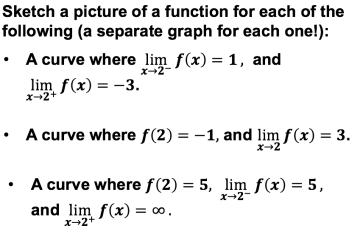